The idea behind our global climate simulator

Home/Novice, OKOLJE/The idea behind our global climate simulator
Previous Next

The idea behind our global climate simulator 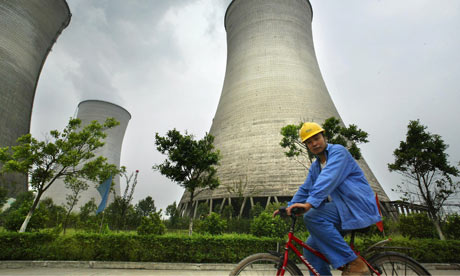 The idea behind our new global carbon emissions interactive is that it does for global climate policy what our quick carbon calculator does for individuals. You specify the year when global emissions will peak and the annual rate at which they decline thereafter and it tells you what will happen. For each scenario, three graphs appear: the first showing emissions between now and 2100; the second showing how those emissions will change the concentrations of greenhouse gases in the atmosphere; and the third plotting the resulting temperature rise.

One purpose of the tool is to illustrate a fact that many people, including some policy-makers, seem not to have grasped: that even when we start reducing global emissions, we’re still adding to the concentration of greenhouse gas emissions in the air. Hence an early peak in emissions is necessary but not sufficient to keep us the right side of a 2C rise. We also need an ambitious plan to decarbonise the world’s energy systems as quickly as possible after the peak. 2C is widely regarded as the threshold for dangerous climate change, although many developing countries at the UN climate talks in Copenhagen have been arguing that we should be aiming for 1.5C. The tool shows you just how hard that really is. The number crunching behind the interactive is based on cutting-edge data from the Met Office.

As the tool shows, only the most ambitious of the Met Office’s scenarios – a peak in 2016 followed by a 5% cut each year thereafter – means that we’ll be more likely than not to avoid the 2 degrees threshold. And even that isn’t a given. The shaded areas on the concentration and temperature graphs reflect scientific uncertainty about things such as the future rate of CO2 absorption by the oceans (to use the jargon, these areas show the 5th and 95th percentile outcomes for each scenario). As they make clear, even the most ambitious scenario could plausibly lead to a 2.5C temperature rise.

A 2020 peak followed by a 1% annual decline, which at the time of writing seems a more realistic outcome of the Copenhagen summit, gives us a temperature rise of between 2C and more than 3C – or higher still if the graphs were continued beyond 2100. In other words, a 2020 peak would give us almost no chance of avoiding two degrees unless it was coupled with a very ambitious rate of decline.

For reference, the tool shows a red line illustrating what’s likely to happen if the world makes no effort to reduce emissions: a temperature rise of more than four degrees by the end of the century. To keep the graphs legible, we haven’t included the shaded uncertainty area around this line. If we had, the possible rise in temperature under this business-as-usual scenario would have been even higher.