An alpine town, the Eiffel Tower, the whole Manhattan skyline … China is replicating the world’s architectural gems. But now Zaha Hadid would like it to stop 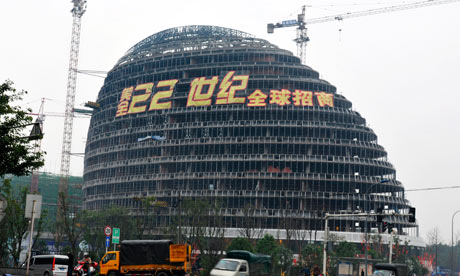 With its soaring church spire, pastel-coloured chalets and splendid lakeside location, Hallstatt looks every inch a picture-postcard alpine town – a place that echoes with the sound of cowbells and yodelling, every windowbox overflowing with edelweiss. But this isn’t Hallstatt in Austria. This one is in Huizhou city, in southern China.

When it was reported last year that the ­Austrian town had been “secretly cloned”, right down to its statues of angels, some ­residents were outraged. But the mayor, ­Alexander Scheutz, was over the moon. “We are very proud,” he said, as he signed up to a cultural ­exchange with his town’s new twin. It is now clear why: the clone has been a lucrative means of cultural ­promotion, with the number of ­Chinese visitors to the real Hallstatt jumping from 50 to 1,000 per year. 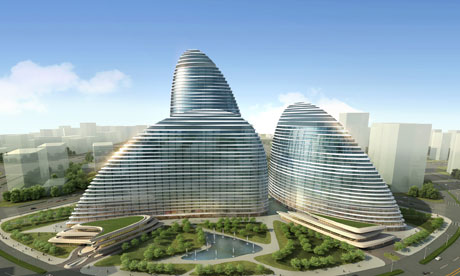 Zaha Hadid’s Wangjing Soho building in Beijing. Courtesy of Zaha Hadid ArchitectsThe issue of China and its attitude to intellectual property rights has now been reignited, following claims that a project in Beijing by Zaha Hadid is ­being replicated by “pirate ­architects” in Chongqing, the megacity in the south. It could even be finished ­before the original is completed next year. The British architect’s globular ­complex of pebble-shaped towers – an office and retail development called Wangjing Soho – is itself something of a copy of her recently completed Galaxy Soho, also in Beijing, and both projects are in keeping with the city’s new vernacular of bulbous UFOs, kicked off in 2007 by Paul Andreu’s ­National Grand Theatre.

Hadid intends to take legal ­action, while a furious Pan Shiyi, the ­billionaire chairman of the Soho empire, has vowed to “bring the infringers to court”. But Chongqing Meiquan, the developer behind the ­building, claims innocence, insisting at a press ­conference that the project was ­inspired not by Hadid’s curves but “by the cobblestones on the bank of the Yangtze river by which Chongqing was built”. It also launched an advertising slogan in response to the furore: “Never meant to copy, only want to surpass.” 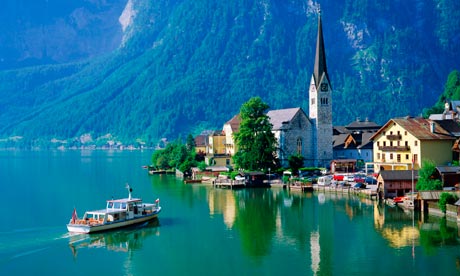 The real deal … Hallstatt in Austria. Photograph: Robert Harding World Imagery/A/AlamyThis catchphrase could be the ­manifesto for modern urban China. From pirated DVDs to knock-off designer brands, the country has a thriving counterfeit culture, often facilitated by local protectionism and a ­reluctance on the part of the authorities to ­enforce fledgling intellectual property laws. Moreover, there are no specific laws protecting architecture, due to its ­slippery definition as a work of applied art – with functional and ­artistic qualities, in which only the ­latter is protected. This overlooks the fact that the two can rarely be ­separated: a facade could be an integral part of a building’s structure, as well as providing its main artistic thrust. So China, like a global architectural ­magpie, helps itself to the biggest and best bits of cities the world over.

“Soho could have a good chance of winning litigation,” You Yunting, a Shanghai-based lawyer specialising in intellectual property, told German newspaper Der Spiegel. “But even if the judge rules in favour of Soho, the court will not force the defendant to pull the building down. But it could ­order the payment of compensation.” 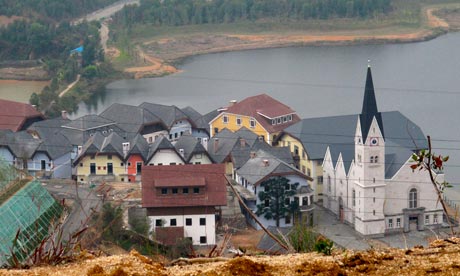 Replica of the Austrian alpine town Hallstatt in Guangdong Province, China. Photograph: Alex Hofford/Sinopix/RexIn many copycat cases, though, the architects are either long gone or ­impossible to name. In ­Tianducheng, near Shanghai, a 108m-high Eiffel Tower rises above Champs Elysées Square; while in Chengdu, to the south-west, a residential complex for 200,000 recreates Britain’s Dorchester. The ­attention to detail can be ­astonishing: a ­doppelganger Queen’s Guard ­patrols Shanghai’s Thames Town, which abounds with statues of Winston Churchill; gleaming ­replicas of the White House dot ­Chinese cities. It all adds up to a surreal ­catalogue of ­”duplitecture”, brilliantly ­documented in the book Original ­Copies: ­Architectural Mimicry in ­Contemporary China by Bianca Bosker. 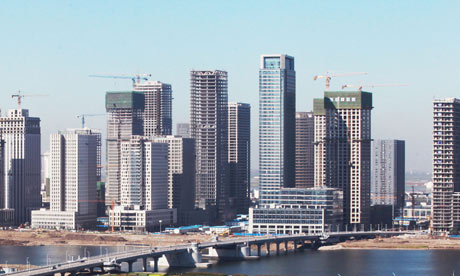 First we take Manhattan … Tianjin’s replica of New York City in China. Photograph: GettyNot content with sampling iconic buildings, some developers are ­duplicating swaths of cities. In ­Tianjin, in northern China, a replica ­Manhattan is being built on the site of a 15th-century fishing village. Complete with knock-off ­Rockefeller and Lincoln ­centres, as well as its own Hudson river, the scheme boasts that it will be “the largest single financial ­centre in the world” when it is complete in 2019.

They say imitation is a form of flattery – but the Fondation Le Corbusier doesn’t see it that way. A counterfeit version of Corbusier’s Ronchamp chapel, a spellbinding building in eastern France, sprung up in Zhengzhou in the 1990s, but was demolished after the furious foundation weighed in. But all was not lost: the ruin now serves as the surreal backdrop for a restaurant. 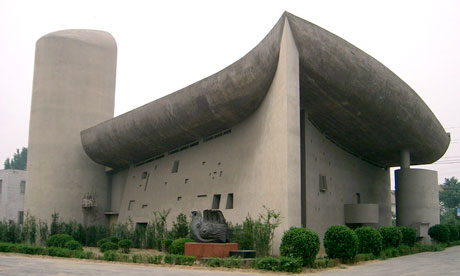 Now a barbecue restaurant … Ronchamp in Zhengzhou, 2004. Photograph: CAIP/BlogspotArchaeologist Jack Carlson, writing in Foreign Policy magazine, argues that the wholesale copying of architectural culture may have its roots in something much bigger than shameless commercial borrowing: “The ancient parallels for these copycat projects ­suggest that they are not mere follies, but monumental assertions of China’s global primacy.” He cites ancient ­China’s premier historian, Sima Qian, who recorded a remarkable building programme pursued by China’s first ruling dynasty, the Qin: “Whenever Qin conquered one of its rivals, it would commission replicas of its ­palaces and halls and reconstruct them on the slope north of the capital. From Yongmen all the way to the Jing and Wei rivers, there were replica palaces, passages, and walled pavilions.” 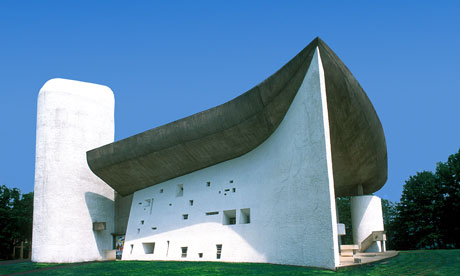 Le Corbusier’s Chapelle de Notre Dame du Haut, Ronchamp, France. Photograph: AlamyIf this clone culture does represent a kind of triumphalism – a way for China to show it has equalled, and perhaps even transcended, the west’s achievements – should we be worried? “Architecture’s whole history is full of people copying each other,” says Sam Jacob of Fat Architecture, whose Museum of Copying was a highlight of last year’s Venice Biennale; it featured a re-make of Palladio’s Villa Rotunda in spray-foam and plaster. “It used to be thought of as a good thing. Copying antiquity is what you were supposed to do, and new things emerged.”

More recently, he says, Mies van der Rohe’s reputation boomed precisely because of his ability to be copied. “That was a big part of his power and success – he could replicate himself, but other people could also replicate him easily.” Jacob adds that if you look at early buildings by the architectural giant SOM (Skidmore, Owings and ­Merrill), they are indistinguishable from Mies; so much so, in fact, that Frank Lloyd Wright nicknamed the trio The Three Blind Mies.

Zaha Hadid’s initial reaction to the doppelganger was surprisingly ­generous: if future generations of these cloned buildings display ­innovative ­mutations, she said, “that could be quite exciting”. But at the weekend practice director Nigel Calvert said: “We will be demanding that the ­copycats immediately cease construction, change the exterior of the ­building, offer a public apology and provide compensation.” Hadid added: “It is fine to take from the same well – but not from the same bucket.”