Researchers challenge view that drivers are overtaxed, saying they are subsidised by other taxpayers 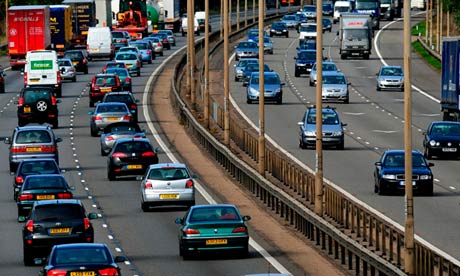 The study found UK drivers accounted for £48bn of costs out of £303bn across the EU – second only to Germany. Photograph: Rui Vieira/PA

The perennial complaint from drivers that they are excessively taxed has been challenged by a study which concludes that road accidents, pollution and noise connected to cars costs every EU citizen more than £600 a year.

The report by transport academics at the Dresden Technical University in Germany calculated that even with drivers’ insurance contributions discounted these factors amounted to an annual total of €373bn (£303bn) across the 27 EU member states, or around 3% of the bloc’s entire yearly GDP. This breaks down as €750 per man, woman and child.

The report recommends that such so-called externalities be factored into the cost of driving, noting that even the €373bn tally does not include costs from congestion or ill health caused by lack of exercise.

The idea that drivers are “the cash cows of our society” is wrong, the authors write: “On the contrary, it must be stated that car traffic in the EU is highly subsidised by other people and other regions and will be by future generations: residents along an arterial road, taxpayers, elderly people who do not own cars, neighbouring countries, and children, grandchildren and all future generations subsidise today’s traffic.”

The study, The True Costs of Automobility, accepts that such calculations necessarily have an element of approximation but give an important overall picture. In a national breakdown it says UK drivers accounted for £48bn of costs, second only to Germany, or about £815 per person per year.

The figures deliberately do not offset motoring-connected taxes unless they are specifically ringfenced for car use, for example a motorway toll where the money is set aside for highway maintenance. The authors argue that other motoring levies form part of the general tax pot and are no more reserved for the impact of cars than alcohol duties are reserved for healthcare or policing drink-fuelled disorder.

Even if motoring taxes were taken into account there remains a significant shortfall in the UK. Fuel duty and its associated VAT along with vehicle excise duty contribute around £38bn a year to the Treasury’s coffers, £10bn less than the estimated cost.

Governments have to get to grips with the issue, said Prof Udo Becker, who led the study, which was commissioned by the Green group in the European parliament: “Internalisation of external costs is the essential thing in a market economy. It’s a prerequisite for everything – for individual behaviour and for innovation within the car industry.”

This was particularly the case for climate change, he said, which unlike accidents was not partially offset by insurance: “With climate change every burning of fossil fuels creates the same amount of damage, so let’s charge the population for driving. Then everybody has a choice. They can use a bike sometimes, or the train, they can drive more slowly, they can think about living closer to their work.”

Motoring groups have previously argued that imposing extra climate change levies on drivers can be unfair if they are not matched by those on other polluters, such as factories.

Edmund King, president of the AA, said studies such as Becker’s tended to be “based on the prejudices of those advocating the research” and dismissed the idea of extra motoring levies.

He said: “Some 86% of passenger journeys and 90% of freight go by road. If the government decided to increase motoring costs by £10bn it would fuel inflation, reduce spending power, increase distribution costs and put more people into fuel poverty. It would also be a ‘poll tax on wheels’.

“We should celebrate the fact that cars are getting cleaner, greener and safer rather than indulge in a doctrinaire debate about external costs.”